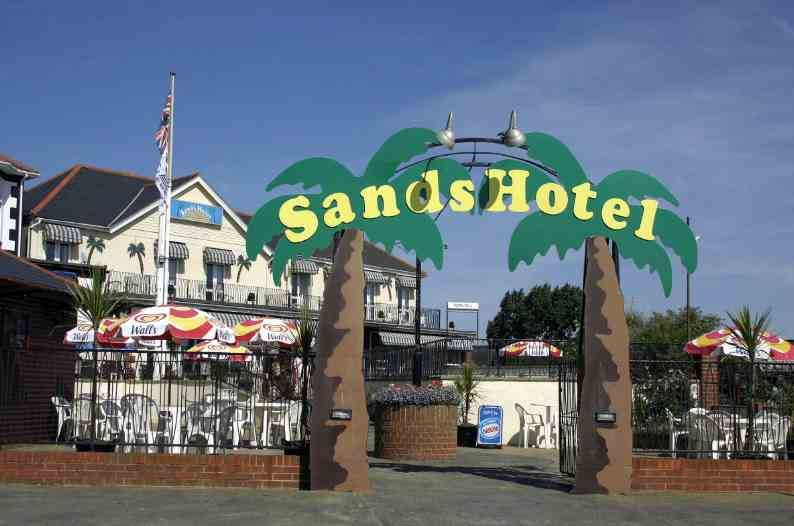 Broad seafront promenades provide delightfully easy walking and are within easy reach of the town centre, the two mile coastal walk between Sandown and Shanklin is a popular attraction using the sea wall promenade. The Sands Hotel is personally managed by Lee and Shauna Morey, who live on the premises and ensure that your stay is to the highest standard of service as well as friendly and welcoming. The hotel’s bar and lounge, like the dining room, looks out to sea across the hotel’s swimming pool and sun terrace, with views of Culver Cliff and Sandown Bay. All of the rooms have en suite Shower rooms with Colour Television, tea/coffee making facilities and hair dryers.

Excursion one: Traveling down the south side of the island passing through Shanklin old village, Ventnor and Blackgang Chine we travel along the Military road to Alum Bay and taking in some of the beautiful costal views. As soon as you think of the Isle of Wight the iconic image of the world famous needles rocks and coloured sands spring to mind.  The Islands most famous landmark has much more to enjoy and includes the spectacular chairlift, Alum Bay Glass craftsmen make a variety of crafted glassware. IW sweet manufactory creating sweets that you will not find anywhere else and the Marconi Tea rooms. Returning to the Hotel via Godshill the quintessential English Village boasting some of the oldest architecture with its delightful medieval church, charming thatched-roofed cottages and a winding main-street.

Excursion two: Yarmouth Castle and cruise on the Coral Star. The Castle provides a magnificent picnic spot, with views over the Solent for a lovely relaxing family day by the sea. Step inside and discover the atmospheric recreation of how the rooms were used in the 16th century. This was the last and most sophisticated addition to Henry VIII’s coastal defences; it was completed after his death in 1547, with the first new-style ‘arrowhead’ artillery bastion built in England. Now for a high light The Coral Star will take us down the Needles channel to see the Needles Rocks. On the way she passes the finest scenery of the island. Hurst castle, Fort Albert, Totland Bay, Cowell Bay and Alum Bay sweeping close inshore as we cruise by.

Excursion Three: Osborn House (admission not included) or Cowes. Osborne House, Queen Victoria’s family home, is one of the most popular tourist attractions on the Isle of Wight. After first visiting Osborne, Queen Victoria wrote: ‘It is impossible to imagine a prettier spot’