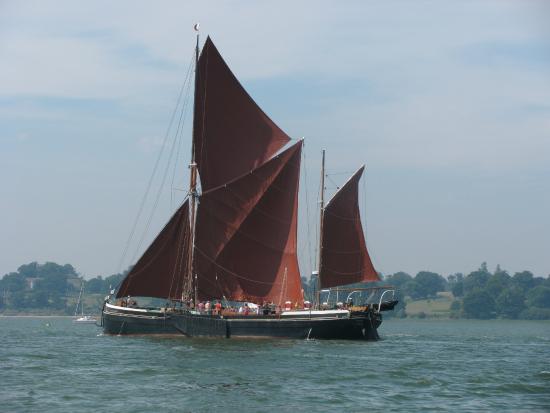 Maldon & Thames Sailing Barge Cruise: Tuesday 5th October. Time to expole Maldon followed by afternoon two hour Two Island Cruise from Maldon Quay, past Northey Island to Osea Island & return with a simple cheese & ham  Ploughmans . Leaving the Quay, the barge heads down river past the Victorian Promenade Park; past the statue of Brithnoth guarding Maldon against marauding Vikings; Northea Island which is a bird reserve owned by the National Trust; Heybridge Basin, the entrance to the Chelmer & Blackwater Canal and to Osea Island with it’s colourful beach huts on legs before returning. The days when Hydrogen carried her cargoes under sail in all weathers on the East Coast seem far from the balmy times enjoyed by her guests today. Built in 1906, she is the largest surviving wooden barge, a Coaster who’s fine lines and sturdy construction are a great example of the shipwright’s craft. Price £59.00 per person Coach will depart Stevenage at 09.00